When Inkblot’s 12th film opens in cinemas on February 28, 2020. These are a few things we are looking forward to based on the content released online since the marketing campaign broke

Lekan played by Blossom Chukwujekwu has been described as a rich playboy who is Liah (Sharon Ooja)’s best friend (Ini Dima- Okojie) ‘s best friend. Lekan is a man of leisure who owns a playhouse and throws parties and hooks up with as many women as will let him. His best friend Jumoke (Ini Dima- Okojie) is a doctor in her late twenties. The scion of a wealthy family born with the most silver of spoons. She was educated at all the best schools and has the world at her feet. 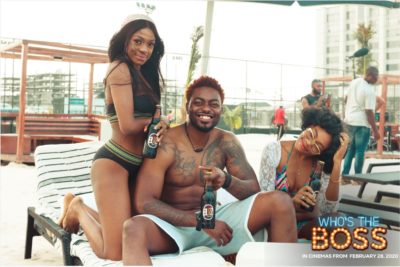 Who’s The Boss has shown us a fun aspect of the film with the announcement and premiere announcement. They have also played on the boss and the employee relationship so well that people offline shared their wicked boss tales. But this valentine’s day, a new theme was introduced. The Love between friends (Ini Dima Okojie and Sharon Ooja) and lovers (Sharon Ooja and Blossom Chukwujekwu). 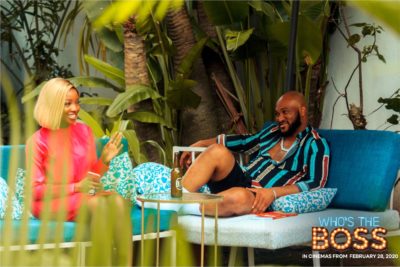 3. A Tale Of Survival

Who’s The Boss is a tale of survival focusing on Liah (Sharon Ooja) an overworked AD agency junior executive whose work life is a living hell, thanks to her demanding boss Hauwa (Funke Akindele- Bello) To find sanity, Liah devises outlandish schemes, including inventing another boss – Lekan (Blossom Chukwujekwu) and of course things go from bad to hilarious and crazy! 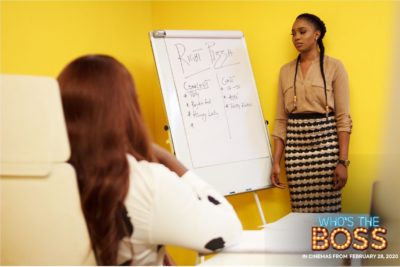 As always, Chinaza Onuzo’s scripts always have strong female characters from Adesua Etomi Wellington, Somkele Idahalama and Iretiola Doyle’s characters in The Arbitration to Osas Ighodaro, Dakore Egbuson Akande and Jemima Osunde’s characters in New Money to Omoni Oboli and Funke Akindele Bello in Moms At War to Tina Mba, Adesua Etomi Wellington, and Kehinde Bankole in The Set Up all the way to Omoni Oboli in Love is War. But Who is The Boss captures all the aspects of the modern Nigerian woman using Liah (Sharon Ooja)’s character

The post RICH KIDS, LOVE, THE MODERN NIGERIAN WOMAN AND A TALE OF SURVIVAL. WHO’S THE BOSS IS A DIFFERENT STORY TOLD AT THE RIGHT TIME appeared first on Nigerian Entertainment Today.